The Year 2010 in a Thousand Units (Second Part)

“The Darling Buds of May”

May 01 “A Tribute to the music of Club 8” at Club Dredd, Eastwood Citywalk

In much anticipation for Club 8, The POPShoppe! threw a tribute to Club 8 with guest bands alongside LSR rosters to cover their favorite Club 8 tunes. See our cover song entitled “Heaven” as blogged by Denise Atas of Lilystars Records.

It was a high-bright sunny day. Went off from Bulacan after lunch hour. We’re so excited, and also nervous. To see Club 8 in the flesh seem already enough and a bit of a struck, but it’s a fact ~we were front act. By the time Karolina & Johan arrived at the SMX Convention Center, we finally had “hello-intro“. The two were so friendly, as well as the rest of The Sweet Serenades. Fast forward to the event, we were the first to perform on stage with a 3-song line up. All original compositions, which then became part of our first EP entitled “It Started With An April Shower“. Read our previous blog about Club 8  called “Happy Are Twee!”. Here are some pictures taken on that very day… 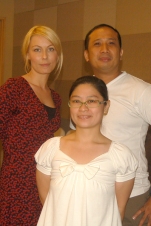 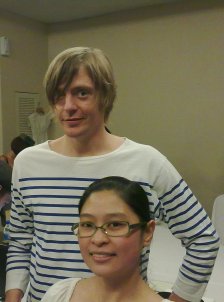 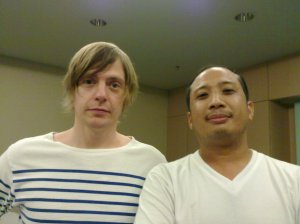 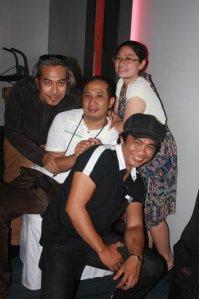 The Gentle Isolation during Club 8 Concert at SMX, Photo by Anne Vitug of SPARK Magazine ♥

So much of delight we had for the past month, and rainy days are here! On this wet season, we were down recording for the EP at SonicState Studio in Mandaluyong. We enjoyed every minute being there because it was learning express! We did not at all notice the hard to hit sections and repeated takes whilst in the process. Bachie got recorded first , then followed by another element until all tracks were complete. It’ll be hefty to write in detail about how the recording went on. So to sum up, I guess everything just went to place, gently…

July 19 – After many moons, here comes the radio debut of the single “Let’s Go Slow“! I was in the office (as for every working day), when I had my ears locked and tuned in at NU107.5 for our first single’s air play. And I good-naturedly waited until I heard that familiar intro – – – THERE IT GOES! What a good-good feeling! I had to buzz Antonette about it, text message Monch, Bachie & Joseph, my Mommy & the rest of my folks to share my wonderful hunch! I guess everybody waited for it too and I thank them for their support. ♥ The song was aired at “New Music Monday”.

“Here Comes The Sun… and The Shower”

August 5 – “Another Sunny Day: A Tribute to Belle & Sebastian” – It’s another exciting tribute to one of our main music influences, and it was fun having covered some of their hit songs. We had our rendition of the songs “Asleep On A Sunbeam”, “Photo Jenny”, “The Boy With The Arab Strap”, & “The State I Am In”.

A few more days before our EP launch, we were counting down the time remaining with pounding hearts ~Excited and nervous at the same time like mentioned on  the blog of Denise Atas of Lilystars Records. Everytime I reminisce that gorgeous feeling, “Having launched in a luxe venue such as the Ayala Museum was really a grand experience for us. We could not believe ourselves that we were the luminaries of that night. Not to mention the heaping support by a great lineup of guest indie artists”, I could not help it but it still takes my breath away. Read the full story and take a peek at really lovely photos during that special night on this link: 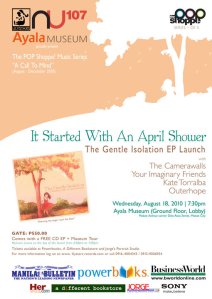 The Gentle Isolation’s “It Started With An April Shower” Opens The POP Shoppe! Music Series: A Call To Mind

After this big event, it surely showered our way to be acknowledged in the indie music scene. The band grew a number of fans and followings, invites and they were all heartwarming! We would like to thank everyone who supported The Gentle Isolation’s EP Launch. To Lilystars Records, the LSR Team, Clementine, Antonette, Denise & Val, The POPShoppe!, event partners the Ayala Museum, NU 107 FM, BusinessWorld and the Manila Bulletin (official media partners), The Camerawalls, Your Imaginary Friends, SonicState Studio, Robert Javier, Jonathan Ong & Jinky Tuazon, Angelo Maniquis & Melody Castro for the wonderful EP cover, Jorge’s Portrait Studio, Francis Brew Reyes  for hosting the event, guest artists Kate Torralba & Outerhope, to all the great writers who had a big heart & had us on broadsheets & spreads and blogged about us, to all the great photographers who had our photos taken ~marvelous! To Elyrey you’re so kind, to Powerbooks and A Different Bookstore (exclusive distributors of Lilystars’ recordings), HerWord.com, Sony Philippines and to everyone whom we had met along our pursuit to the musical journey.

Then, we would NOT forget that we became: NU107’s ROCK RECRUIT for the whole month of SEPTEMBER!

It really felt like as if we won the NU107 Rock Awards!

September 2 – Radio guesting at UR105.9 with the hilarious gang of The BrewRATS, and here’s a dozen photos we took from the studio:

“Imagining and dreaming no more!”

September 17 – I’m a huge fan of Your Imaginary Friends. The first time I got my ears hooked on them was when we had a gig together for The POPShoppe! at 70’s Bistro. (I think, if my memory’s serving me right) That was when they played this familiar song I so like “Young Folks” by Peter Björn & John, from then on I can say there’s something interesting going on with this band. Oftentimes, we get to bump with the band on different gigs, and became music buds. I would always stand in front of the stage whilst their set is on to expect my ears to be happy. 🙂

I happened to have the chance of taking a peek on their EP cover design while it’s on the making process. We were at LSR HQ that time, Eric and Ahmad showed me two designs and let me give inputs, as they were voting on what design to use. I thought it would look something like a lively image like the persons that they are but seeing that carousel in gloomy theme, not to mention the horse that had run away, it felt odd for some time until after their EP launch. They gave each one of us a copy of their EP, signed by the band. Opening the case, was a shiny CD in deep blue color and I  instantly liked the little stars detail there, by the way. I guess it took me a week or two to discover what’s on the background underneath the CD holder, and to my surprise ~a big belly laugh! Well I always thought, “There’s something interesting going on with this band!”.

I wish I had the clearer illustration though 🙂

October 09 – WATCHING THE WHEELS: A Birthday Tribute To JOHN LENNON – On this special tribute, we’ve done renditions on hit songs ‘Lucy In The Sky With Diamonds’ and  ‘If I Fell’

October 16 – The POPShoppe! and Lilystars rosters celebrated Halloween early, but were all in comical costumes and characters. Emerald of Your Imaginary Friends enumerated them in her created photo album and I happened to stick the list here.

October 23 – Heima launched their new collection of funky furnitures on an event called “From Heima with Love The Collection 2.0 The Launch Party”. We happened to meet Mars Sambo of Heima before the launch during a gig at SaGuijo, and she gave us post card invites of the party. I fell in love with post card design, at first sight! It tickled my fancy and even got more excited having a glance on their website to find more for my eyes’ delight. 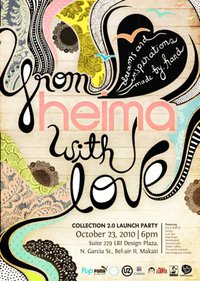 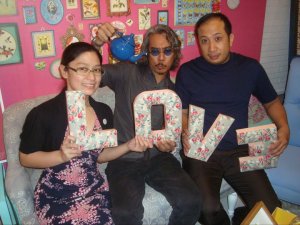 “Helloween, before so long, NU…”

October 31 – On the night of Halloween, we were one of the last to be featured on NU107’s “In The Raw” with DJ on board that time was, well, if it isn’t who dubbed me with, “Dimples as the new cleavage…”, Francis Brew Reyes! On brief interviews and chaffs, each of our songs was played, followed by the rest of Lilystars rosters, Your Imaginary Friends and of course, The Camerawalls, whom had their raw track (their first single “Bread and Circuses”) aired using a mobile phone (since it was “In The Raw”). Funny, it had to alert for an incoming message whilst on air. But it was a bit of a melancholy wrapping up the program, for the radio station will bid its farewell the next day. Raised our glasses high inside the booth, for the station that rocked the nation, and for the music! Cheers!

“Bracing ourselves for more…”

◊ The Camerawalls embrace Joseph Rudica, as their official drummer. Read on web log entry on this link.

◊ Had a photo shoot at the Amoranto Sports Stadium for PULP magazine’s Dec-Jan issue with a funny-faux Santa Claus. Hilarious shots. Along with the article on Homegrown, is a remarkable CD review by Jason Caballa (of PEDICAB).

Here are samplers of the shots that were on the magazine.

The long-awaited EP was finally launched last December 11, a day after celebrating Clementine’s birthday. Cheers to the man behind the label, Lilystars Records and music of The Camerawalls!

December 30 – The POPShoppe! Year-Ender Party was a special last episode, wrapping up the year with Cheers for the best times gone by.

We’ll always be grateful for everything that comes our way.

Our musical journey had been grand for the year 2010, and we could not think of a better way of sharing and celebrating it, for all it’s worth, the way it had been.

Mile high cheers for the music!