Days Before The Event

We went counting down days ’til the big night, not excitingly but nervous and (soon would turn to regret). Yes, you guessed that right. We still haven’t got tickets in our hands, few days before the event. We were really out of Pink Floyd’s song (‘Money’) this time around. Bill’s always there chasing us and could no longer borrow some from anywho. But the good heavens heard two earthlings’ little wishes. 2 GOLD-en tickets magically came from a genie named, Antonette (of Lilystars Records). I know Monch that time would not want to let this once-in-a-lifetime chance to just slip away. He would always utter that his only ultimate connection to the bands whom he loves listening to was through his collection of cassette tapes (and I mean tapesss! He has crates full of cassettes and CDs!). Imagine 2 decades of having their songs linger every single day of his life from cassette to CD to mp3. Decades of evolution of music format and still their songs are as ever refreshing!

After picking up the tickets from Antonette, now headed to One Esplanade, urban commuters’ style! Thanks to Angelo for the directions. 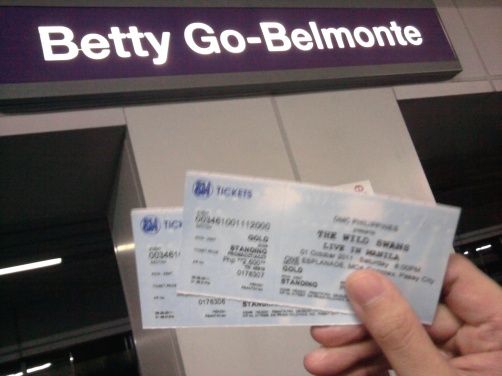 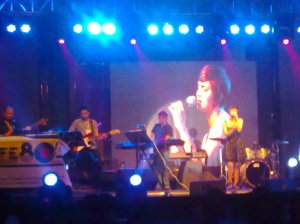 After opening here comes the main act… The host of the event introduced the band and it went (In a royal rumble match manner) “The long wait is over! Ladies & gentlemen, finally, it’s for real! May we present to you with pride… All the way from Liverpool, England… Please give a big hand to The Wild Swans!!!” and the crowd went crazy! The swarm indeed was wild, shouting and screaming “Paul! Paul!” and enumerating their favorite songs “Mythical Beast”, “Whirlpool Heart” and even Care’s “Flaming Sword” as requests for the band to perform next. I understand why these fans has this kind of hype and it’s just inexplicably high! It’s been a yearning wildly swanned, finally fulfilled. 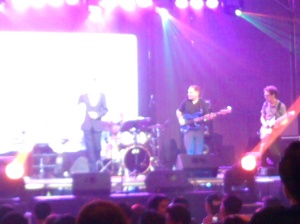 Me taking videos from mobile phone

Most of the songs the band performed were from the Platinum Collection and few ones from their newly released album. The latter part was my favorite because there they played my best picks “Bringing Home The Ashes”, and even “Whatever Possessed You” (from CARE, Paul Simpson & Ian Broudie duo). Trying to name each songs on the setlist:

Paul came explaining in the middle of the show that he had been taking Chinese herbal medicine for his cough and that it tasted very revolting. He apologizes that he might not be able to sing very well especially those songs with high notes saying, “You see, I’m really really old now…”. Awww! Then came intro to the song “Northern England”, really heart felt.

After their performance, was the meet and greet and photo op with Paul and the rest of The Wild Swans sessionists. We waited for a while maybe an hour to let the queue go down. And as for my turn, the security guy asked me if I wanted to take a picture and of course I said “Yes!”, he quickly gave way and told his guys to give way for me so I can walk beside Paul. When I was beside Paul already, I think he thought I was a kid and so he quickly gave the chair and let me sit beside him and to my surprise he gave me Pepé Le Pew smooches on the cheek (or was that my ear?) or I think that was just his nose on my ear. Really funny experience… Priceless! I think though that was because I was the only female lined up among the guys holding up their vinyls and CDs. Monch was also able to get his records signed. And Paul said to him that he was looking for the album ‘Space Flower’ for a long time now, and I think Paul even was asking for it, ironically. Here are the epic photos! 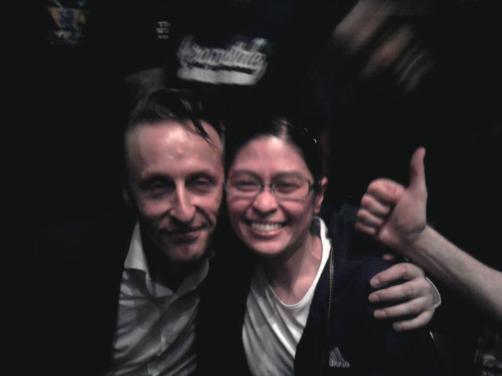 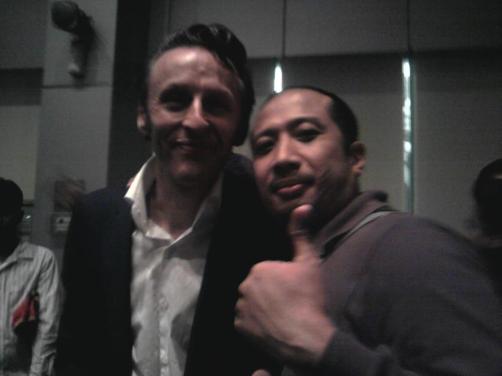 I’d say, it was the best event for this year. I will always turn to music no matter what life brings. It is the music that binds my sanity for which I turn to even if I get the blues sometimes. I guess it’s all part of life’s music, that even if the sun is not up, we know that the stormy weather won’t last.